Team NL – Back on track?

Mandy and Coen are both excellent sailors. Are we on the right track? They are fast and smart but their confidence, time on the water, and mental game will not yet win them a medal. We have been battling injuries, struggles with coaching and I wish that I could be more for them but when we started working together I had other responsibilities as well. It kills me but we will do all we can to win that medal. I want the medal just as bad as they do but that is only half the battle. We will need to be critical and sharp and most importantly will need to be confident to sail in Rio. Off to the harbour to work on boat speed.

What started as a super launch of the 2017 season ended with a team who lost the energy to finish the Worlds. We won OCR but then this high point was quickly reversed due to some team negotiations. An Olympic journey seems very simple to outsiders. What people don’t realise is that because you are living up to one moment in time (THE GAMES) that the decision making on a day to day becomes trying to plan for the “unknown”. All of the teams are excellent at getting the majority correct but the team that wins is the team that was better able to plan for what they didn’t know would happen.

What happens if one of us gets sick? What happens is our coach can’t make it to the course? What do we do if it is different conditions than what we planned for?

In the end we lost track of focusing on the Worlds as the Worlds and then we couldn’t reach our goal. This balance of looking towards the Games and just “becoming the best team” could and does make teams crazy.

Inside the athlete bubble. Indaba

Why is it that for some people an event can be incredibly important and for the others they think of it as a chore. The indaba is a well thought out several days in order to bring across a message from the sport federation to the athletes. In theory it all makes sense but for whatever reason, it totally misses the mark. The athletes can not open their minds to things other than their own training and plans and the federation has a directional message . . . directing the athletes to act and be a certain role model. So what should be done different? Good question. Top sporters are interesting as they live in a bubble and I still haven’t decided if this is a good thing or bad thing. More to follow.

Written by Mischa on November 30, 2015. Posted in Blog, coaching 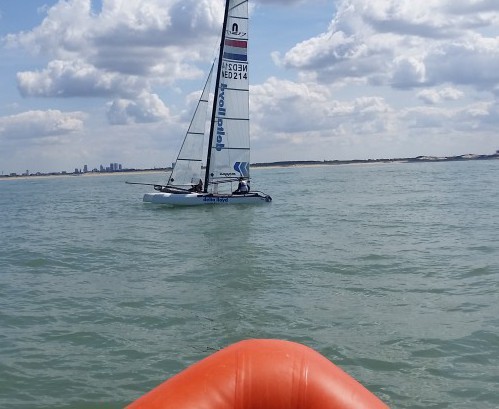 Working with mostly with the Dutch Nacra 17 team Coen & Mandy who will be attending the Olympics for the Netherlands in Rio.

Training in Buzios Brazil is an efficient place to train. The team made great progress with starts and jibing routines. Working for and together with Team Brazil and Denmark in this training made good progress in the variety of circumstances. The great many starting drills made everybody sharp.

Written by Mischa on November 20, 2015. Posted in Blog, coaching

The team has qualified to compete in the 2016 Olympics of Rio Brazil.

Written by Mischa on August 7, 2015. Posted in Blog, coaching